Being energy independent in Amerta Nadi

“It’s inexpensive, healthy, and clean.” Residents of Panyabangan village are reaping the benefits of producing biogas from manure waste.

The mid-day air is breezy when you enter the Penyabangan village of Payangan, Gianyar Regency. There are lush trees, green rice crops, and the sound of rippling water running along the roadside. A small public sign reading “Koperasi Tani (Koptan) Amerta Nadi” (Amerta Nadi Farmers Cooperative) hangs by the side of Jalan Raya Kintamani road in Payangan. 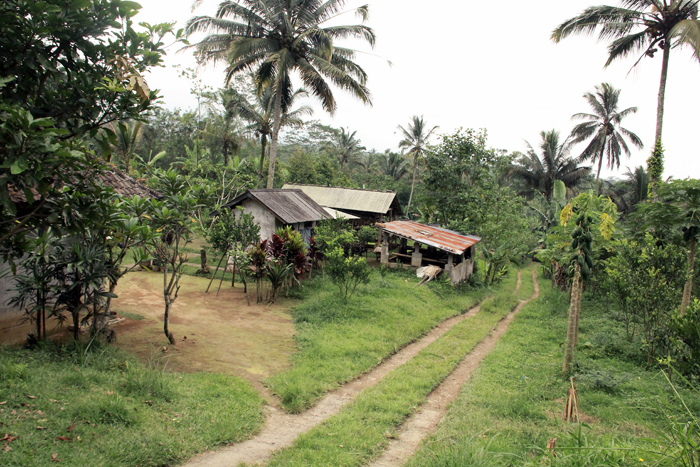 Behind the plain façade of the Amerta Nadi Coopertaive, there is much enthusiasm to improve the condition of the region’s farmers, who struggle with poverty and a lack of access to essential energy resources, such as gas for their cooking stoves. But the dream of becoming energy independent is not a far-off fantasy. Banjar Penyabangan is home to a pilot project for the development of home-scale biogas systems run by Hivos, with funding from the Government of the Netherlands.

“Families who don’t have the money to develop the biogas infrastructure don’t have to worry. Our cooperative can now provide credit loans,” says I Nyoman Suardana, the General Manager of the Amerta Nadi Farmers Cooperative.

There are now seven families who have received loans from the Cooperative to build biogas reactors. According to Suardana, the cooperative can still meet the loan requests of the village for now. Demand continues to grow, however, and he worries that soon the cooperative won’t be able to approve all the applications.

“We hope that there is an organization or funding source that can partner with us to provide credit funds for community members who want to make biogas,” explains Suardana.

Suardana is optimistic about finding funding for the biogas program. He believes the community has seen firsthand the benefits of biogas, and their commitment reassures Suardana they will find funding solutions. The interest in their cooperative is already expanding to neighboring villages, from which they are already receiving loan requests. Thanks to this project, “people don’t need to buy gas at the market or look for firewood for cooking. Besides that, there are the health and safety advantages of biogas, and it is eco-friendly,” says Suardana.

Ni Nyoman Ramiati, the Biogas Promotion Officer for the Cooperative in Bali, explains that biogas is fermented from organic materials such as human waste, animal manure, and household waste. Riamati, who goes by the nickname Mangming, says that the main energy-producing ingredients in biogas are methane and carbon dioxide.

She explains that biogas has many advantages: it is inexpensive, requires little energy to produce, and is healthier, cleaner and more advanced than other gas alternatives. “Biogas can be used as a fuel for cooking and lighting, and the leftover materials from making biogas can be used as organic fertilizer.”

I accompanied Mangming and Suardana to see one of the resident’s biogas reactors, which had been paid for through the Amerta Nadi cooperative. This biogas reactor belonged to I Wayan Ranti, who was using it to process at one time 10 cubics of biogas material made up of animal manure.

The system used to create biogas is very simple: A container to hold manure is placed near the cowsheds or pigpens. When cow manure is used, it is combined in a one-to-one mixture with water before being added to the reactor tank through a pipe. If biogas is made using pig manure, no mixture is necessary. 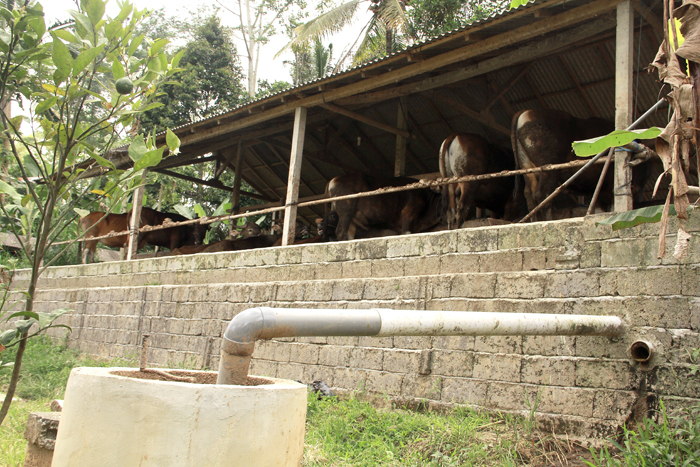 The dome-shaped top of the reactor provides the space for the materials to react and emit biogas. A pipe attached above the dome leads to a gas valve and supplies gas directly to a stove in the kitchen. Everyday, around 30 kg of animal manure is added to the reactor in order to fulfill the families’ daily biogas needs.

Upon our arrival to his home, Ranti appeared from the garden near the house, carrying a basket filled with fresh oranges. “These oranges are planted and maintained using all organic materials made up of fertilizer left over from creating biogas,” he said, beaming with pride.

Before starting the independent energy program, the Amerta Nadi Cooperative was focused on food security. “Every planting season, farmers are faced with the same problem: they don’t have the capital to farm their land. This was the driving force behind starting our Cooperative,” says Suardana. The Cooperative helped by providing credit to local farmers.

There are now a total of 98 cooperative members, supported by Amerta Nadi through their own traditional Balinese cooperative irrigation group called subak. “From the beginning, this cooperative was a collective force,” Suardana adds.

Besides providing credit to farm the land and setting up a biogas production system, the Amerta Nadi Coopertive also provides credit to help with the expenses of traditional Balinese ceremonies, which are often an unplanned and costly expense for a family. “The money they have is not always enough. To help families with ceremony expenses, the Cooperative can provide credit loans,” explains Suardana.

Finally, Amerta Nadi Cooperative also purchases farming produce. The Cooperative buys un-hulled rice from farmers at a price of Rp. 3,500 per kg and corn for Rp. 3,000 per kg. After the rice is hulled, the rice grains are sold for Rp. 6,500 per kg. Every harvest season, in January and August, the Cooperative can store around 25 tons of dried un-hulled rice for the farmers. The rice is then hulled, using a rice mill machine owned by the cooperative, producing around 3.5 tons of rice per day.

Through their many local projects, the Amerta Nadi Farmers Cooperative works with farmers to find efficient and eco-friendly ways for them to achieve subsistence security and self-sufficiency.