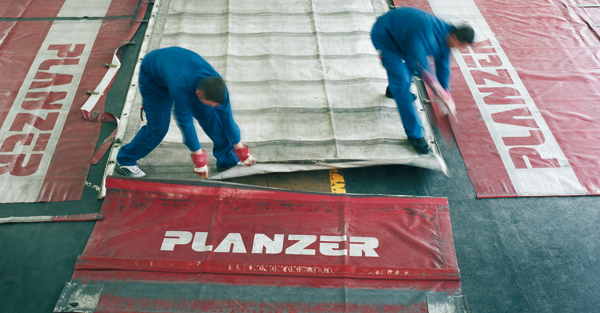 It’s not hard to spot the young people in Europe walking around with these colorful bags, displaying a patchwork of fragmented letters and images and made of synthetic materials like thick plastics. These are the Freitag bags.

If the bags look a bit dirty, it’s not because they’re rarely washed. Most likely it’s because these bags are made from the plastic tarps that were once used to cover commercial trucks, accumulating dirt and silt that are difficult to remove during production of the bags. It’s hard to make them look completely clean. But that is what makes Freitag bags special. 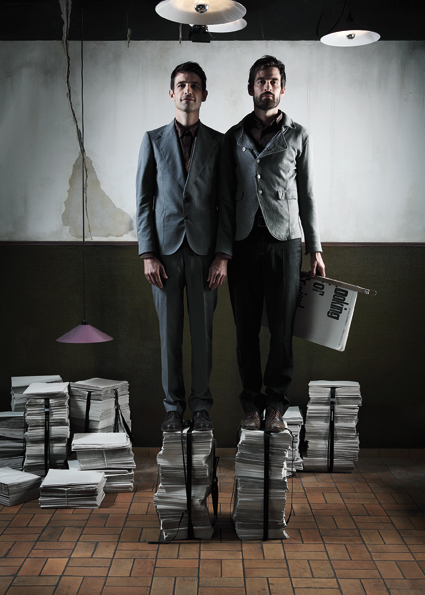 It all started when Swiss-born Daniel and Markus talked about wanting to own bags like the ones used by postal delivery people in New York. These bags are practical, waterproof, large, and easy to carry on a bicycle. But these graphic designer brothers felt the price of a courier bag was just too expensive.

One morning in 1993, Markus headed into the industry district on his bicycle. He returned with a few sheets of used truck cargo tarp, which he hauled upstairs to their fifth floor apartment and dumped into the bathtub. Once the tarps were cleaned and dried he spread them out on the floor, between his mattress and a stereo, and he started cutting the tarp into patterns. Old seat belts were used as straps and broken inner bike tires were used to protect the edges of the bag.

A concept was born. They were making quality bags from used material. The materials they chose were waterproof, strong, and available in a variety of colors. The only new materials they utilized were wire, velcro and buckles.

Their new bag production changed their apartment living rapidly: “For weeks our bathtub was filled with dirty water and smelled like old tarps. The apartment was cluttered with various materials, bicycle tires and seatbelts,” recalls Oliver Gemperle, their former flatmate—his tone discontent with the state of their apartment at the time.

Gemperle also mentioned that an industry standard sewing machine had taken over their dining table. The used machine was purchased for US 500 dollars and was the first investment the Freitag brothers made in their new enterprise. And Gemperle was consoled with the gift of two pieces of the first version of Freitag bags. A gray Freitag bag, one of the first designs, is now part of a display at the Zurich Museum for Gestaltung.

These days, the Freitag brothers no longer make bags out of their apartment. They first expanded by opening the retour Gebr in 1995. Then in 1999, the Freitag lab.—a shorthand meant to signify both “laboratory” and “label,” was established. It reportedly grossed US 52 million dollars in 2003 and employed around 40 people fulltime. Freitag also supports 1,760 outsource staff through a manufacturing company which employs people with disabilities. This commitment to humanitarianism, combined with the environmentally thoughtful practice of making new products out of used materials, is what makes the Freitag business special.

In their first year of operation, Freitag only produced 40 bags. By 2007 they were producing 160,000 products a year. Now there are over 40 styles of Freitag bags, including courier bags, DJ bags, laptop bags, iPod cases, backpacks, wallets, shopping bags, purses, punching bags, and even footballs. 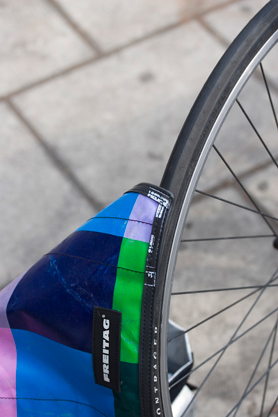 Freitag products are available in 350 stores spread out all over the world, including Switzerland, Germany, Austria, England, France, the Netherlands, Belgium, Italy, Spain, Portugal, Sweden, Denmark, Finland, Israel, Turkey, the United States, Australia, New Zealand, Japan, Canada, China and Singapore. In Switzerland, the Freitag signature style is easily spotted as the bike baskets of girls on their way to school.

“Innovative,” “creative,” “niche market,” and other similar terms often used to describe some of the most noteworthy modern production systems definitely apply to this company. Freitag bags are like a shimmer of light in a dark urban market that reveals: “Look, it is possible to make good products, even when most people are limiting their creativity by only following their obligations and investing in stock.”