The coral goddess of Pemuteran

Under the seas of Bali’s North coast sits a wonderful goddess in a garden of green and blue. A beautiful sanctuary of fish and ocean flora surround her, and slowly, through her help, the coral that was missing from the eco-system is enjoying a prolific reemergence as a vital and life-sustaining element of the marine environment.

Years of hardship forced the fishing communities to degrade the reefs of Northwest Bali, in the region of Pemuteran. As the economic crisis and the resulting threat of poverty weighed heavily on the tiny communities, they turned to dynamite and cyanide to produce greater numbers of fish for sale, unaware that these destructive practices would harm and endanger the reef. The small fishing industry competed against fishermen from neighboring Java for their daily share of the market.

When the seas warmed as a result of climate factors, including the impact of El Niño in 1998, the reef, which was already under threat of degradation, began to deteriorate and die. Fifteen years ago it was a place of very little life, and the entire North Coast was threatened by its extinction.

Fortunately, through foresight and scientific exploration, Pemuteran was rescued. Yayasan Karang Lestari (the Sustainable Reef Foundation) created the Pemuteran Artificial Reef project to preserve the marine environment in the region. The Karang Lestari Project was launched in June 2000 through the initiative of Yos Amerta, Dr. Tomas Goreau and Professor Hilbertz. The first protective reef structure was set in place in 2000, and since then, the project has found support from the owner of the Taman Sari Resort. Now the project, supported by teams of divers, designers, and villagers, is blossoming.

The restoration of coral employs a method that allows the reefs to survive and recover from damage in an initiative called the Biorock Process. Electric currents are pulsated through metal frameworks, which encourage limestone to accumulate. This, in turn, encourages coral growth.

Coral reefs built with the Biorock Process are now successfully growing in the Maldives and Papua New Guinea, and the most recent development of this technology has taken the project off the grid and into solar power. The Coral Goddess, the name for the latest project created between Karang Lestari and The Marine Foundation, uses solar panels to harness the energy she needs to pulsate life into the structures that promote coral growth. 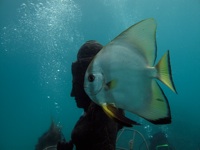 The other benefit to the area is the appeal of the Coral Goddess to tourists, who come to visit her in her garden. Positive contributions to the growth of coral in this region include the provision for sustainable tourism or eco-tourism, as well as educational tourism. Recently, a group of thirty young students from the Bali International School visited the Coral Goddess and the Bio Rock Education Centre and met with project coordinators Rani, Celia and Komang. They gained insight into some basic principles of a marine environment and enjoyed the rest of the day in the ocean. Those who chose to swim made their way in snorkels and flippers to visit the Goddess, while the rest took a trip on a glass-bottomed boat. This type of tourism also improves life for the local people of Permuteran, who can take pride in the efforts they have contributed to the Karang Lestari Project and to the future of their coastal home.

The Taman Sari, the Marine Foundation and Karang Lestari welcome visitors to the BioRock and Coral Goddess Gardens and are able to arrange educational talks and multimedia presentations of their work. They also create specially crafted signature structures for individuals and groups that can be placed in the coral gardens to support the growth of even more corals.

With an increase in coral growth, the entire marine environment is improved, as life beneath the sea becomes once more part of the delicate web of balance that is a marine ecosystem. No one life form can out-balance another without stressing the fabric of interdependence. The local villagers now better understand this fact. They have a deeper appreciation for their environment and a strong interest in preserving for themselves and future generations a way of life that cares for the marine environment, whilst farming it in ways that are sustainable and profitable.