Many traditional Balinese recipes are on the verge of extinction. Modern farming practices, such as the use of chemical pesticides, makes it difficult to find the pure and safe ingredients needed for many of these dishes.

Lawar, a minced meat dish, ayam betutu, herbed chicken, and babi guling suckling pig, are a few of the most popular traditional Balinese dishes today. But who has ever heard of or still eats dishes such as kuah be nyawan or pesan be nyawan? Both of these Balinese delicacies are made from wasp nests. Pesan be nyawan tastes spicy sweet from the combination of galangal (an Asian plant in the ginger family), Javanese dried chilis, coriander, cumin, and cloves. Other ingredients include coconut, kencur (from another ginger plant), and fresh chilis.

Recently I was lucky to get to taste these unique dishes for the first time at Warung Tresni, on Jalan Drupadi in Denpasar, Bali. These dishes are not usually on the menu at Warung Tresni because the ingredients are so difficult to find. One can imagine sellers don’t always have wasp nests on hand at the traditional Denpasar market. 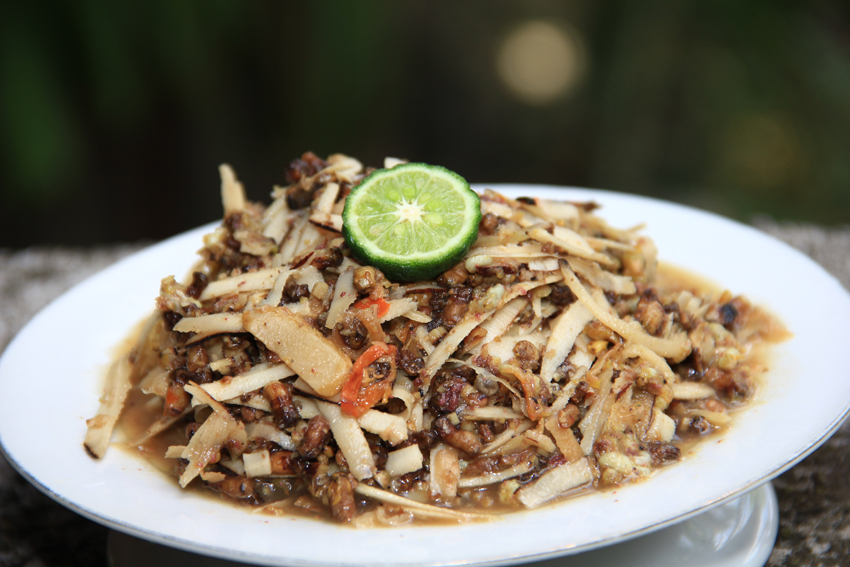 “If someone has wasp nest, I am ready to cook it. Usually my friends bring it to me from their village and ask me to make it,” says the owner of Warung Tresni, I Ketut “Gogonk” Pramana.

Gogonk and others who work at Warung Tresni are committed to reviving and preserving Bali’s culinary traditions. So far, they have documented and prepared about forty traditional Balinese dishes that are nearly extinct.

Another surprising dish periodically on offer at the warung that are practically unknown today include jubel manis (sweet dragonfly larva). This delicacy is spiced with jeruk limau (a type of lime), coconut oil, and roasted coconut meat. 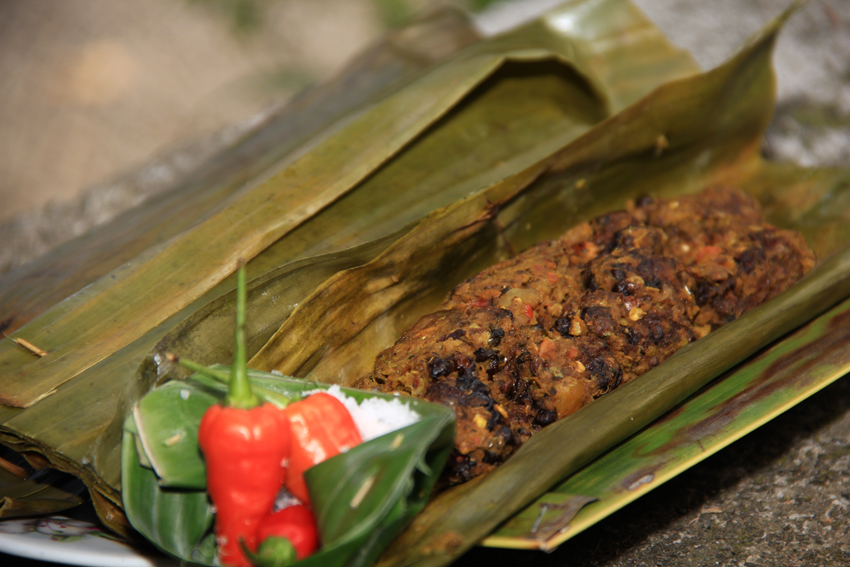 Jubel is the name for the phase of the dragonfly, when it has morphed from an egg into the dragonfly nymph. After the dragonfly egg hatches, the dragonfly larva lives and grows in water. Then the larva develops into a jubel, a voracious minature carnivore. Dragonfly nymphs feed on tadpoles and baby fish. They are  also the rice farmer’s friend, as they feed on wereng, a type of rice pest. However, because modern farming practices depend on chemical pesticides to kill wereng and other rice pests, the jubel is being eliminated, along with its food source. “When I was little, I would often find jubel in the rice fields. But nowadays kids don’t even know what a jubel is” says Gogonk.

The traditional Balinese dishes that Gogonk is documenting often developed because of the agricultural lifestyle: He explains, “Farmers like to eat foods which can be quickly cooked. This is because they leave for work early in the morning and are tired when they return home from working in the fields. So the process of cooking their foods is often quite simple.”

Gogonk says that these four ingredients are his compass in the kitchen. Other flavors can be added through his culinary journey. Shallots, garlic, chili, salt, terasi, (a fermented shrimp paste), and other spices are all common. Through a combination of these classic flavors, Gogonk can create many of the dishes on his menu.

“These spices are what I call the ‘mother sauce,’ which holds the meaning of balance in the concept of life,” explains Gogonk.

Balance in the concept of life. An interesting idea to ponder. Especially as Balinese modern lifestyles have created an imbalanced relationship, with their foodways, their culinary heritage, leading meals as fantastic as jubel manis or kuah be nyaman, inherited from the ancestors to be lost forever.