World music to stage a fair fight in Nusa Dua

After speaking with a number of figures in the Indonesian music industry who have performed overseas, I’ve learned that the initial struggle they face is the same: They have difficulty finding the funding to support their overseas performances.

Many of these musicians say that the invitations they receive to perform abroad must be turned down because they don’t have any sponsorship. And these are not just unknowns in the music scene; some of these musicians have the demonstrated potential to break into the international music industry. They are spearheading the promotion of Indonesian music. 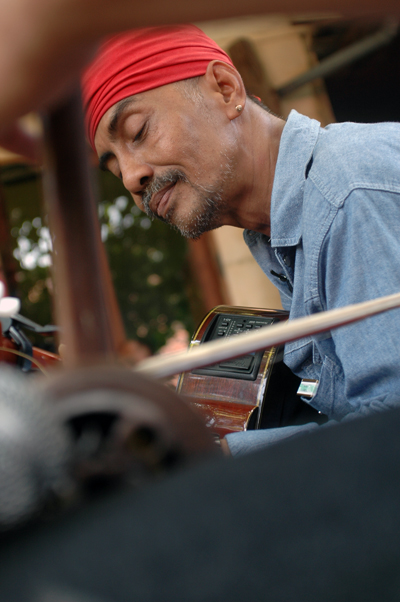 Without having a chance to build their reputation, the international music scene will not give local artists the chance to perform. It is important to assess the potential of Indonesian music in the International market, which could fill demand through national world music groups. This market is currently represented by groups such as Krakatau, Simak Dialog, Samba Sunda, Gangsadewa, Debu, Jes Gamelan Fusion, Bona Alit, Discus, Svara Semesta, Tropical Transit, Altajaru, Balawan, Toba Ansambel, Sonoseni, DKSB, Ozenk Percussion, Indonesian National Orchestra (INO), and others. These musicians have put dedication into expressing themselves by creatively developing local music elements. This is important to trace, in efforts to develop the national creative industry, which relies on music products.

A few decades ago, the international music industry became interested in the genre known as world music. In the beginning, world music was understood as ethnic music from non-Western countries, or in Indonesia what we know as traditional music.

The first world music to boom on the international market was Latin American music. Latin music at that time stimulated the imagination of jazz musicians in America, so since the beginning this style dominated the world music stages on an international scale.

Latin musicians had the benefit of their geographic location being close to the industry center of world music: the United States. Furthermore, since the beginning, Latin music has created a blend of local music from countries in Latin America, as well as Western music. This makes it easier for musicians from the United States or Europe to develop this style in the context of tonal music expression.

In the 80s came the second wave of the world music trend. This time the genre of choice was traditional African musics. Where Latin music had suddenly caught the attention of the world due to the interest of jazz musicians, African music was the object of interest of pop musicians such as Paul Simon. Peter Gabriel also saw the potential of world music on the international market, and he founded a large-scale world music festival series called WOMAD (World of Music Arts and Dance).

Following that momentum, folk music from Europe also broke into the industry, particularly Celtic music from Ireland. Traditional music from Asia that successfully made an impact in the world music market mainly came from India: Their selfproclaimed ‘heroes of the industry’ included such figures as Ravi Shankar and Zakir Husein. Since the 1960s Indian music was fortunate to gain worldwide recognition because of groups such as The Beatles, which made popularized Indian styles of music. 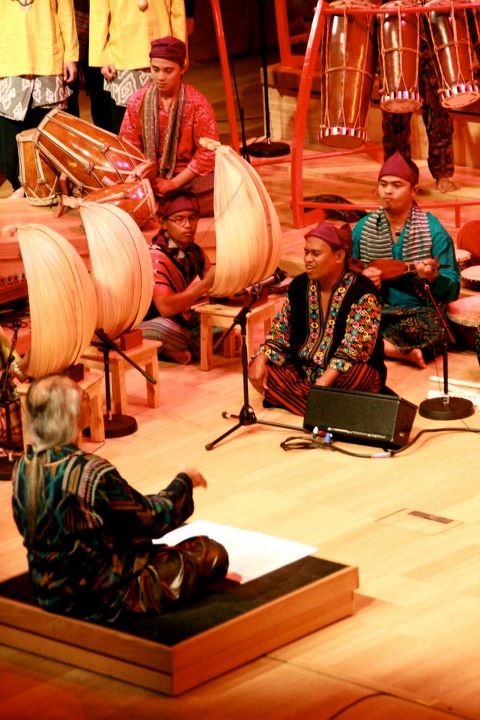 From Indonesia, gamelan music has become the icon on the international market. No other orchestral tradition, such as gamelan, has managed to break into the world music market. Because of that, gamelan has also gained popularity in universities, within ethnomusicology programs.

Ethnomusicology is a recent discipline that studies ethnic music from around the world. The term world music was actually made popular because of its use in ethnomusicology. Graduates of ethnomusicology are responsible for sharing knowledge of the world music genre through their publications. Many ethnomusicologists are employed at record labels, both in smaller music industry enterprises as well as with industry giants such as Sony Music and Virgin Records.

At the same time as world music and ethnomusicology were gaining popularity, contemporary music from North America became more and more interested in non-Western music. North American composers of the 1960s, especially those from the West Coast, were no longer referencing only European traditions, but instead were looking to Asia and Africa for inspiration. As a result, a new movement in music was born which was called minimalism. Pioneers of this genre include Terry Riley, who studied gamelan and Middle Eastern Music, La Monte Young and Philip Glass, who studied music in India, and Steve Reich, who studied gamelan and African musics. These four people are responsible for the popularity of this genre of contemporary music, which prior to their influence had limited impact within the industry.

World music continued to gain popularity, and by the 1990s it claimed a greater percentage of the music industry market than jazz or classical music, which has had decades and even centuries to develop. In the 1980s, the world music market grew from being undocumented to holding 3 percent of the world market. 10 years later this genre of music held 10 percent of the market.

If, by rough estimates the entire music industry gross capital for all genres were USD $80 million, then the world music genre brought in USD $8 million dollars per year by the 1990s. But at that time Latin American, African and European musics still dominated the world music market. Word music from Asia was still far behind.

In the entire world, the country richest in world music is none other than Indonesia. If you measure diversity alone, the traditional musics of Indonesia from across the archipelago is comparable to the diversity across the entire continent of Africa, and definitely worthy of competing with Latin America and Europe. Seen in this light, this article’s introduction is quite ironic. While other countries around the world were realizing the potential in the creative industry, key figures in Indonesia’s music industry have not gained appreciation in the eyes of the people or the government.

The Indonesian Music Expo (IMEX) will be held in Nusa Dua, Bali from November 7-14th in order to address just that problem. IMEX aims to expand the opportunities of local music industry figures and give them a chance to compete fairly and win the hearts of the ‘market’ investors. Bali is an ideal location to test the Indonesian world music market, as it is the most internationally influenced region in the country. Ubud, for example, has become a small-scale center for international art.

Ubud may be the fastest-developing and most international area in all of Indonesia. At this time, the small area of Ubud already has three prestigious international art festivals: The Ubud Readers and Writers Festival, The BaliSpirit Festival and the Bali Inter-Music Festival. Because of this, after Nusa Dua, IMEX will move to Ubud from the 15-16th to hold a workshop and seminar covering the theme “Understanding the Market potential of Indonesian Music.”

The speakers at this seminar are the heroes of the music industry that I mention above. The hope is that they will be able to share their experiences from the international stage to all the IMEX participants, especially those who have not yet had the opportunity to perform outside of Indonesia.

One speaker at the IMEX workshop is a digital music expert from Australia, Professor Greg Schiemer. For four days, from November 10-14, he will hold a workshop on how to create (not only use) technology in order to make music more creatively. Professor Schiemer is a digital music expert from Wollongong University who has designed many new electronic devices for creating music. These electronic devices can be used to develop traditional Indonesian music instruments. The work of Prof. Schiemer borrows many concepts from gamelan music. One outstanding device he has created is called the “Pocket Gamelan,” a mobile phone application developed for 30 service providers The appication can be programed to imitate the high frequencies of the gamelan tones.

This workshop will also be a chance for Prof Greg Schiemer to collaborate with traditional music masters from all over Indonesia, who will be attending the IMEX event at Peninsula Beach, Nusa Dua. 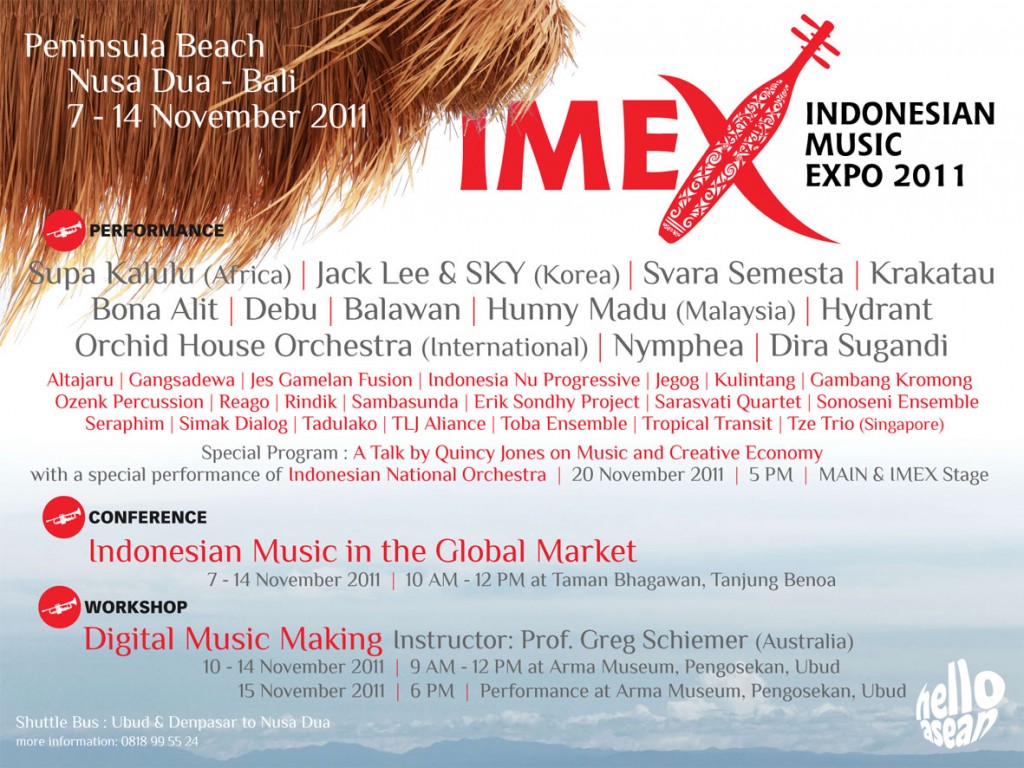 * Franki Raden, Ph.D. is a composer, ethnomusicologist, and founder of the Indonesian National Orchestra.